Today we observed the optional memorial of Blessed Benedict of Urbino, a Capuchin preacher and founder of shelters for homeless people from the later sixteenth century. Today's memorial of Pope St. Pius V is optional even here in Rome, much to my surprise.

In his Office of Readings we were given the beginning of the ninth chapter of the Capuchin Constitutions of 1536. When I read the first line, L'evangelizzare la Parola di Dio (the modern Italian rendering of the original, lo euágelizare la parola di dio), of course I began to think about evangelization and the 'new evangelization' to which we are called in our time.

Click here to keep reading...
Posted by Brother Charles at 4:17 AM 3 comments:

Today I had to prepare a mailing to all the English-using circumscriptions (provinces, vice-provinces, custodies, delegations) of the Capuchin Order. It's something like forty percent. That doesn't mean that they  speak English in all those places, just that English is used for official communication with the General Curia. (The other choices are Italian, Spanish, Portuguese, French, German, and Polish.)

It's a fascinating exercise in the place and power of the English language in the world and especially in the life of the Catholic faith: 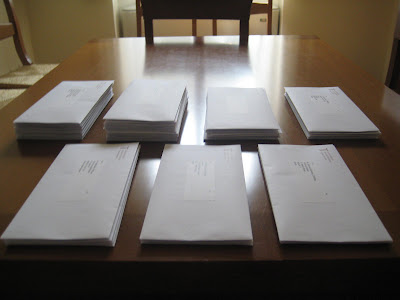 The piles, from largest to smallest, are for India, Africa, North America, Asia, Oceania, the Near East, and Europe (that is, Britain, Ireland, and Malta.)

Such an illustration also helps me see how the recent new translation of the third edition Roman Missal into English was an even bigger deal than I realized.

Posted by Brother Charles at 4:30 AM No comments:

Proper Calendar of the Diocese of Rome

Here in Rome today is the feast of Pope St. Leo IX, who is remembered mostly for being pope at the time of the mutual excommunication of the Bishop of Rome and the Patriarch of Constantinople in 1054. It was the occasion of my discovering something I've been mildly interested in finding since being here: a proper calendar for the diocese of Rome. I don't know how up to date it is; one notices right away that it isn't recent enough to include Pope Blessed John Paul II. Of course there are a lot of saints that also appear on the universal calendar but are celebrated at a different level of solemnity in Rome. And, of course, I can't help but point out the presence of two Capuchins.

Nevertheless, here it is, after the jump. Optional memorials are in italics, feasts in capitals, solemnities in boldface capitals, como Dios manda.

Click here to keep reading...
Posted by Brother Charles at 3:41 AM No comments:

The news from Boston started appearing just as I was about to go offline for the night. I haven't been sleeping so well lately, so I tried to pray for everyone, those who were killed, those who were hurt, the scared, those responding. I started to think about how fragile it all is; in my own life-moment before moving here to Italy, one of the most refreshing little islands of peace was my few minutes of standing at the corner of Dartmouth and Boylston at six in the morning, waiting for the bus that would take me to South Boston for the seven o'clock Mass at St. Brigid's.

One of the curious things about praying the Scriptures in a new language is that you are constantly reminded of questions of translation. Today there were two big ones.

First, this morning I started my week as lector for Mass. Practicing and then proclaiming the first reading for today (Acts 5:27-32, 40B-41) I was a little thrown each time by the Italian of verse 30, which translates xulon as croce, 'cross.' I'm much more accustomed to the word 'tree' here, as it is in the RSV or as it is heard in the American lectionary today:

The God of our ancestors raised Jesus, though you had him killed by hanging him on a tree.

It makes a difference whether you say 'tree' or 'cross' there, doesn't it?

Second, something else reminded me a fun story.

Today in the Office of Readings we have, in the book of Revelation, the opening of the first six seals. I took a course in Revelation back at the former Weston Jesuit School of Theology, one of a handful from which I emerged feeling like it had helped me understand Christianity better at a basic level. As we progressed through the book, for a little fun, but also, I think, to help us keep in mind the visual nature of the narrative (it is, precisely, a vision after all) the professor would hand out photocopies of pictures of Albrecht Dürer's famous woodcuts of the various scenes. One of the students began to return to the following class, having colored in the Dürer with her crayons. It was very amusing to me to see her trying to show her coloring to the professor. It seemed to me like the good Jesuit, a distinguished scholar of the New Testament, didn't know whether to be charmed or appalled. Or maybe that was me projecting.

In the course of the coloring project, a problem eventually arose when we came to the opening of the fourth seal and the appearance of the fourth Horseman of the Apocalypse. The first three Horsemen had been easy enough to color: white, red, black. But the fourth, the chlóros horse, had presented a difficulty. In English, it's often rendered as 'pale,' but chlóros might also suggest something like green. Not knowing what to do, the poor student had left the horse empty of color, but had brought her box of crayons along to class hoping that the professor might, in his expert opinion, choose for her the one that most approximated chlóros. I don't remember if a decision was made.

Perhaps the old pale/green/pale-green question of the fourth horse is further complicated by the fact that nowadays we associate the color green with life and flourishing, not with the identity of the fourth Horseman, Death. If we didn't keep our dead in refrigerators or put makeup on them, maybe it would make more sense to us.

I was reminded of all this during the Office of Readings because in Italian the fourth Horseman is said to be verdastro, a word I'm sure I didn't know before this morning. My most valued dictionary says it means, 'greenish, greeny.' I didn't know that 'greeny' was a word, so I guess I've made progress in two languages today.

I Came To Do Good, And I've Done Pretty Well

Sometimes I get into some anguish over this life that I have chosen, this vocation. Has it made me a more charitable person, someone more open to the love of God and more free to love his neighbor, or only more selfish and self-involved? Does it give glory to God? Is it really a sign of his coming Kingdom? Twice I have chosen to seek entrance into one of the mainstream branches of the Franciscan Order instead of some newer, reformed group. Was that the best thing? The best thing for me? What God willed for me? Has this life brought me closer to Jesus? (This last one was the solitary criterion of discernment for my spiritual director at the time of my entering the Capuchins.)

Then there are my relationships to the brothers themselves, to the Order, to the Franciscan movement, etc. Are these not ambivalent in many ways? Isn't it true that I have never really felt comfortable or at home in religious life as I have found it? If I examine my conscience on what I have vowed, that 'with all my heart I give myself to this Brotherhood,' am I not overwhelmed by what is found to be lacking?

When I heard the gospel at Mass today, however, it occurred to me that maybe all of this might not be such a bad thing.

Click here to keep reading...
Posted by Brother Charles at 3:02 AM 2 comments:

A Patron Saint for Reverts to the Faith

Today is the feast of Blessed Anthony Neyrot, OP. I think he could make a fine heavenly patron for 'reverts' to the faith.

Here's his entry in the Martyrology today:

At Tunis on the coast of northern Africa, blessed Anthony Neyrot, priest of the Order of Preachers and martyr, who, taken by pirates to Africa, apostatized, but, helped by divine grace, publicly took up again the religious habit on Holy Thursday, which atoned for his crime by covering it with stones.

Some other things I read on the internet said that during his apostasy he had become a fairly devout Muslim and had even made a socially advantageous marriage. Holy Week 1460, however, found him inspired to repent of his apostasy. Having made his confession he was re-invested in the Dominican habit and then, on Holy Thursday, was stoned to death for his re-version to the faith.

Blessed Anthony, pray for us!

For the feast of the Annunciation today it occurred to me to pray St. Francis's Salutation of the Blessed Virgin Mary, which contains that wonderful, mystical title of Mary, Virgin made Church:

Click here to keep reading...
Posted by Brother Charles at 3:37 AM 2 comments:

Email ThisBlogThis!Share to TwitterShare to FacebookShare to Pinterest
Labels: Francis of Assisi, Mary

St. Augustine, preaching to the newly baptized, grabbed me in the Office of Readings today:

This is the power of the sacrament: It is the sacrament of new life that begins at this moment with the forgiveness of all past sins and which will come to perfection in the resurrection of the dead.

Baptism sets us on a journey, initiates in us a process.

At breakfast this morning I got into an interesting conversation on the broad variety of practice in the Order regarding the praying of the Liturgy of the Hours in common. For example, in my province it's pretty standard to pray just the hinge hours, Morning and Evening Prayer, in common. Here in the Curia, however, we also pray Midday Prayer together. In the house where I stayed over last summer, we also often prayed the Office of Readings in common. I have to say I didn't really care for it, as accustomed as I am to pausing on interesting phrases and taking as much time as I want to reflect between the readings and responsories.

Regarding the contrast, he had an interesting comment, which went something like this: 'If the brothers pray the minimum of the Hours in common, the danger is that they will never think of the other Hours, or because of doing the least allowed they will begin to see the liturgy as less of a value. On the other hand, if the brothers pray all the Hours in common, it can happen that they never learn to think of praying their breviary on their own, as if they had no individual responsibility for their prayer.'

A thoughtful comment, I thought. As much as I hate the term, is the answer 'balance'?