Liturgical Books and Our Sense of Time

Anyone who has used a hand missal or a breviary is familiar with the chart of movable days somewhere in the front. I find it interesting to note how far they go into the future, because I suspect it says something about our sense of time and change.

My hand missal for the ordinary form, published in 2003, goes up to 2010, suggesting that the editors imagined one would use it for seven years. Perhaps it was a good guess, given that we expect the new and improved English translation of the 2002 Missale Romanum one of these days. [As we know, it arrived for Advent 2011.]

My Baronius Press hand missal for the extraordinary form, published in 2007, has a calendar that goes up to 2066, suggesting a much longer sense of how long someone might use it.

The 2002 Missale Romanum contains a liturgical calendar that goes up to 2023, about the same span as the breviaries. The 1954 Missale Romano-Seraphicum, however, has a calendar that goes up to 2003, more than twice the span. The editors imagined it being used almost long enough to come back as an option after forty years of Novus Ordo exclusivity!

I'm sure there's a dissertation to be written here, but on the face it one might guess that folks used to imagine liturgies (and books!) as lasting longer than we do now.

2019 update: On a recent visit to the Specola Vaticana, the Vatican Observatory, the Brother Astronomer showed me a volume of the work of Christopher Clavius, SJ, who was one of the main authors of the Gregorian calendar reform, promulgated by Pope Gregory XIII in 1582. Just on the page that was open, his calculations for the date of Easter, etc.--in the sixteenth century!--go up to 2031. I don't know how far the charts went after that. So it goes to show that sixteenth century Jesuits (at least) had a longer view of the calendar than any of the liturgical books I mentioned in the original post. 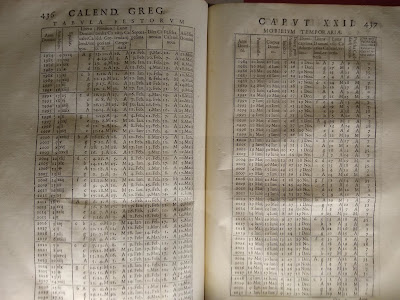 Among the various quotes and greetings on Twitter for the feast of St. Francis yesterday, there was also mention of the almond cookies that are traditional for the day. I thought folks might be interested to know the source for the association of this special treat with the passing--the Transitus as we Franciscans say--of Francis of Assisi. Here it is in Assisi Compilation chapters 7 to 8:

Although racked with sickness, blessed Francis praised God with great fervor of spirit and joy of body and soul, and told him: "If I am to die soon, call Brother Angelo and Brother Leo that they may sing to me about Sister Death."

Those brothers came to him and, with many tears, sang the Canticle of Brother Sun and the other creatures of the Lord, which the Saint himself had composed in his illness for the praise of the Lord and the consolation of his own soul and that of others. Before the last stanza he added one about Sister Death:

"Praised be You, my Lord, through our Sister Bodily Death,
from whom no one living can escape.
Woe to those who die in mortal sin.
Blessed are those whom death will find in Your most holy will, for the second death shall do them no harm."

One day blessed Francis called his companions to himself: "You know how faithful and devoted Lady Jacoba dei Settesoli was and is to me and to our religion. Therefore I believe she would consider it a great favor and consolation if you notified her about my condition. Above all, tell her to send you some cloth for a tunic of religious cloth the color of ashes, like the cloth made by Cistercian monks in the region beyond the Alps. Have her also send some of that confection which she often made for me when I was in the City. This confection, made of almonds, sugar or honey, and other things, the Romans call mostacciolo.

Lady Jacoba was a dear friend of Francis. If you've been to the Basilica of St. Francis in Assisi, you have at the very least walked right by her remains, which are entombed at the level of the landing as you go down the steps into the crypt. 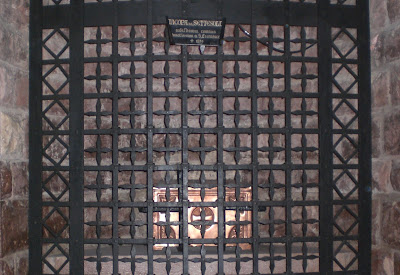 Sign up for your free access to the Franciscan Sources from the Franciscan Intellectual Tradition project.
Posted by Brother Charles at 10:58 AM No comments: