Looking for a Spiritual Director

The Fourth Sunday of Easter, already. The Sundays of Easter always seem to go faster than those of Lent, no? I appreciate this fourth Sunday because it's now that the great shift of the Easter season comes into focus: with the Sunday of the Good Shepherd we have moved definitively from the simple and bold announcement of the Risen Lord to a celebration of how this Lord remains present to us and with us. Of course this movement comes to its fulfillment at Pentecost, with the Gift Who is the Holy Spirit.

One way the Good Shepherd has been with me in these days is in my search for a spiritual director. Since coming to Rome I have known that a spiritual director was something I wanted to give to myself. In one sense it might seem like something not too difficult; Rome, after all, is lousy with priests and religious. Surely the Holy Spirit could find one of them willing and fitting for this relationship with me.

But the truth is that I have yet to find someone. I have prayed for God to show me the way to someone I might ask, I have made requests and sent letters, and so far I have not arrived at anyone. Right now I have two possibilities that I have followed up on with letters and I pray they have the effect that God wills for me.

According to a worldly logic, it could seem frustrating; an effort with no result. But the truth is that I feel fine with it; it is my faithfulness to the process that matters. I seek a spiritual director because I want to care for and cultivate a spiritual life; while I am seeking that care and cultivation lies partly in the search itself, in my faithfulness to following up on recommendations, to discerning whether some suggestion may be from the Holy Spirit, etc.

In a way it's like prayer itself. Does prayer yield clearer ideas of God? Perhaps not. But it does give us trust in the Mystery even as our entering into it renders it ever more mysterious. Does prayer make clearer the path that God sets out for us, our next steps? Not always. But prayer prepares us to trust the path even when we can see no more than the very next step, and strengthens us to take that step with a certain serenity.
Posted by Brother Charles at 4:37 AM 1 comment:

A Prayer After Holy Communion

Lord God, may this Holy Communion with the Body and your Blood of your Son be for me true food and true drink (John 6:55) to nourish the person you have created, and to starve and put to death the old man (Ephesians 4:22) with the futile conduct he has learned. (1 Peter 1:18)

May this Holy Communion burn in me with the fire of your Holy Spirit, to conceive me anew as a member of the Body of Christ; may it burn my lips like the coal with which you purified the voice of the prophet Isaiah (6:7) so that I may speak the truth to myself, to those whose journey you make intersect with mine, and to the world.

Let this Holy Communion sink into me as that white stone, inscribed with the new name that no one knows except the one who receives it, (Revelation 2:17) that I may come to know You who call me by name, by the true identity by which I am truly called, and in which is my only real existence, in You, conceived by Your Holy Spirit and reborn in the humanity of Jesus Christ.
Posted by Brother Charles at 3:31 AM 4 comments:

This is cute to me: our physician gives us Mass intentions from her prescription pad. 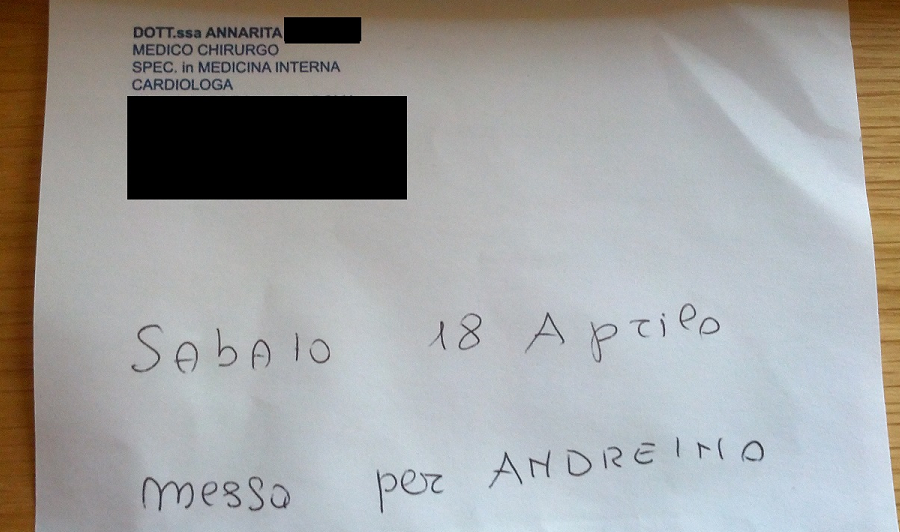 Email ThisBlogThis!Share to TwitterShare to FacebookShare to Pinterest
Labels: Fun

The Easter Octave--that standing still of the first day of the new creation for eight days--has passed, and we enter into the second week of Easter. And with it comes the beginning of the Book of Revelation in the Office of Readings. I always find the letters to the Churches a challenging examination of conscience.

I know you are enduring patiently and bearing up for my name's sake, and you have not grown weary. But I have this against you, that you have abandoned the love you had at first. Remember then from what you have fallen, repent and do the works you did at first. (Revelation 1: 3-4)

Lord, help me to re-member the love I had at first, but give me also the discernment to know the difference between the good desire for that love and the itchy lust of nostalgia for first fervors that can never return. Overshadow me with your Holy Spirit and conceive me anew as a member of the Body of Christ, that I may bear well my own small part of your sacred humanity, buried in the waters of baptism and raised up to new life in your Resurrection. Renew in me the taste for  the "contemplation of divine things and assiduous union with you in prayer" which is the first duty of the consecration you have granted me in your mercy. (Can. 663 §1) May I live my "primary duty of proclaiming the Gospel of God to all." (Vatican II, Decree on Ministry and Life of Priests) Make of me a humble servant of God and a follower of most holy poverty. (Rule, V:4) Above all, grant me the grace of surrendering to the particular and unrepeatable holiness that your tenderness wills for me.
Posted by Brother Charles at 5:40 AM 2 comments:

Email ThisBlogThis!Share to TwitterShare to FacebookShare to Pinterest
Labels: Prayer

Activism and Sobriety in Rome

Next month I will mark three years in Rome. That's half of my assignment, at least as it stands right now on paper. And after these almost three years, I think I may have arrived at my first fully-formed criticism of 'Rome.'

This past week I spent a couple of days interpreting between Italian and English for a small international meeting. The brothers were about preparing a working document for a larger international meeting on the way. Of course the document is written in Italian, and will then have to be translated into the other languages of the participants.

There was a little tension in the meeting regarding the translation of the document from Italian to English. For example, it was said, probably rightly, that the Italian terms attivismo and sobrietà cannot be correctly rendered into English by their obvious cognates, activism and sobriety, respectively, but rather other words that approximate the Italian meanings must be chosen. Approximate. Every translation is a betrayal, of course. Omnis traductor traditor and all that.

All of which got me thinking. If every translation is a betrayal to one degree or another, as indeed they are, and it is just such misunderstandings and failures in communication that lead people to reject documents that come from 'Rome,' why would a Roman institution (like the General Curia of the Friars Minor Capuchin, for example) insist on using as its base language a language that is very small in terms of general international use and increasingly small in the international use of the Church, namely Italian, and thereby multiply such opportunities for misunderstanding and miscommunication in translation? In other words, according to Wikipedia for example, Italian is the twenty-fifth most spoken language in the world. Is it thus the best choice for the base language of documents for an international organization?

In this I see what must have been the powerful utility of Latin. Why not make Latin the base, working language again? Why shouldn't the international working language be a challenge that unites instead of a small property that insists upon the pitfalls of translation? Yes, translation would still have to be made back at home. But at least the document in the 'typical edition' would be in a language that was nobody's property in particular.

I remember one eminent friar saying that back when international meetings themselves were conducted in Latin, they took much less time, because friars only said what they really needed to say. Everyone likes shorter meetings. And they're cheaper too.

And if Latin is too radical a proposition, sending religious and priests as it does into anaphylaxis, why not make English the base, working language, as many other international organizations have done? At least then the 'typical edition' of documents would be in the single largest language group with regard to the constituency.

All of this is why, when I'm General Minister (may God forbid it!), the working language of the General Curia will be English and the liturgical language will be Latin, which is after all the ordinary language of the liturgy anyway (Sacrosanctum Concilium, 36.1) That way, respectively, the inevitable misunderstandings in communication are minimized, and the language of the liturgy becomes nobody's property, but a challenge that can be shared by all.
Posted by Brother Charles at 3:56 AM 1 comment: