Warning: this is something of a non-post.

Recently I went on my first errand to procure a papal blessing, and I thought it might result in one of my 'Italian Adventures' posts. You know what I'm talking about, those papal blessings. You've seen them. People get them for special occasions, big anniversaries and things like that. Here's a picture of one I found on Wikimedia Commons:

Obtaining these things for purposes associated with the English-using Capuchin world is part of my new job. You can arrange for them in lots of the gift shops around the Vatican, but because I thought it would be more prone to having an interesting adventure, I decided to go right to the office in the Vatican itself, the Elemosineria Apostolica. How would you translate that? The 'Apostolic Almonry,' I guess. Unfortunately, no great story emerged.


I took the standard two buses to down by the Stazione San Pietro, went through the tunnel and crossed the Piazza in front of the basilica. There I noticed, on the morning of February 4, the time had arrived to take the lights down from the Christmas Tree. 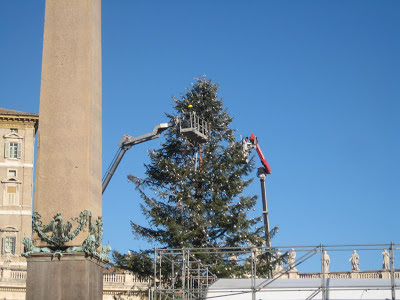 From the other side of the Piazza I walked up to the gate that's by the church of St. Anne (the parish church of the Vatican), entered, and asked the Swiss Guard if I could please visit the Elemosineria.

"I have a request for a blessing," I said.

I don't think he was in a very good mood. A long line of Asian tourists was also snaking in and out of the gate, having to be told in small batches that perhaps they were looking for somewhere else. Arriving at the office, I found the blessing section empty of other customers, and gave the request I had typed out to one of the sisters at the counter. She inspected it, stamped it (Italians love to stamp things), stapled it to a form of her own, and sent me to the cashier's window. After a moment a gentleman appeared, put another stamp on the thing, and collected the money.

That was it. No 'Italian Adventure' occurred. Maybe next time.

On the way out of the Vatican I ran into a kid I had met in Assisi, a veteran of the Swiss Guard in fact, who is searching out his Franciscan vocation. Right now he's down in the south of Italy spending some time with the Frati Minori Rinnovati. In your charity offer a prayer for his discernment. He asked for my phone number and then dialed it so that I would have his. Later on I realized that I had forgotten his name so I saved his number in my phone as 'Assisi Kid.' Not to worry; if he enters the FMR he probably won't have that nice phone for long.

Returning to the bus stop to catch the first of the two buses home, I joined an Eastern bishop saying his prayer rope and a Roman lady saying her rosary. My bus came before either of theirs. On the way home I said my rosary for the couple that is supposed to receive the apostolic blessing on their thirtieth wedding anniversary. Ad multos annos!
Posted by Brother Charles at 12:12 PM

Maybe next time you go to the almonry you could take along some completely unrelated document - maybe the bus schedule - and ask for an exemplar of the stamp to take with you. That might instigate an adventure.

Still an interesting story, even if no adventure resulted. Your fellow bus travelers were quite unlike anything you would experience in any big U.S. city.