On Being Without St. Patrick's Day

I woke up this morning and the first thing I noticed was how much daylight there was. Spring is coming, I suppose, but it's also that on Sundays I can sleep in until almost six. I know, right? Scandalous. My second thought was, 'Passiontide!'

It's probably one of the precious few things testifying to my sanity that, when packing my two bags and a backpack to move to Italy, I didn't think to bring the purple maniple that I had previously re-purposed into a Passiontide veil for my crucifix. 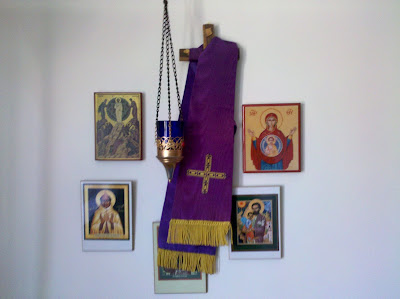 But soon I noticed something else about today. It's St. Patrick's Day, isn't it? I think it's the first time in Catholic life, now in its twenty-first year, that St. Patrick will pass with no liturgical notice. I've spent a large portion of those years in the archdioceses of New York and Boston, where Patrick enjoys patron-saint status and so holds within himself, in those places--as well as many others in the neighborhood--the power to rise above the strict liturgical confines of Lent.


To be honest, it's fine with me to go without St. Patrick's Day for once. Not that I have anything against the Irish; some of my favorite friends, both in real life and online, are Irish. The winter and spring that I lived in Ireland, alleged to be studying philosophy at University College Galway, was one of the most socially rich periods of my young life. There was my teacher Fr. Garvey, one of my great early Franciscan influences, there were the local drug dealers who taught me to enjoy backgammon, the punk rock girls I would meet at concerts in Salthill, and the kind confessors at Galway Cathedral, who, true to their national character, didn't mind if trying to make an integral confession required you tell a story.

But, as I have often said, I think St. Patrick has done the Church Militant a lot of damage by deciding to die during Lent and thus leaving us to celebrate him during this joyful season. One time when I was in the parish I counted up all the days of Lent that were lost to celebrations associated with St. Patrick. The parades, parties, pre-parade ceremonies, after-parade congratulatory celebrations, banquets of great Irish-American organizations, etc., all added up to about one Lenten day in five being lost to activities that could be called penitential in no accepted sense. Not a negligible loss, it seems to me. I once suggested that the days of Lent lost to St. Patrick and his celebrations might be made up after Pentecost, like the extra days of school in the spring for snow days in the winter.


Nevertheless, I'll admit that it feels weird to be without St. Patrick's Day for the first time in my Catholic life. It reminds me on the one hand that my life here in Italy has been more different than I expected, and, on the other hand, to pray--and ask St. Patrick's prayers--for all those other places I have been and the good people that Lord gave me in them.
Posted by Brother Charles at 4:06 AM

I have often thought that if the Church hadn't contained St. Patrick's day by locating it in Lent, it would have naturally expanded to have become the Holy and Glorious Season of St. Patrick if placed anywhere else.

By gift or blessed coincidence, my turn to preside at the community Mass fell on today, the feast of our Seraphic Doctor St. Bonaventure. ...