So here I am on vacation, home in the USA. I brought my Italian Liturgy of the Hours to use so I wouldn't forget the little bit of the language I've learned over there. But for those of the Hours that I pray with the brothers, I went and dug out of storage my old Roman-Franciscan Christian Prayer, which was given to me for my use when I arrived as a postulant with the OFM way back on July 17, 1994. (The day is easy to remember because it was the final match of the World Cup (Brazil vs. Italy, 0-0, 3-2 (penalities))).

However, when I found my old friend, I saw that it had no ribbons. A breviary with no ribbons? What kind of Catholic do you think I am?

I must have harvested them for some other purpose which I have now forgotten about. Too bad I hadn't anticipated this issue; I could have gone up to the S.Paolo 1951 store in Assisi and consulted the wall of ribbons for a replacement: 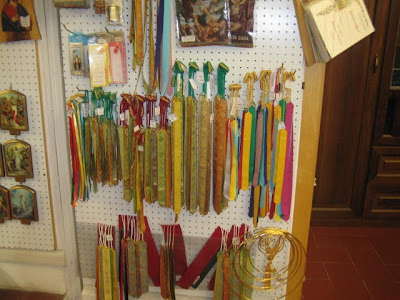 Not feeling inspired to make my own--and in this regard I boast in the Lord to say that the markers I made for the hymnals in our house of post-novitiate formation all the way back in 2002 from ribbon I got at the fabric store, staples, and a cut-up Cheerios box remain in service to this day--I picked up a set of replacement ribbons from the local religious article store.

Now, as often happens, when you put a set of replacement ribbons in your breviary, they turn out to be a little too long: 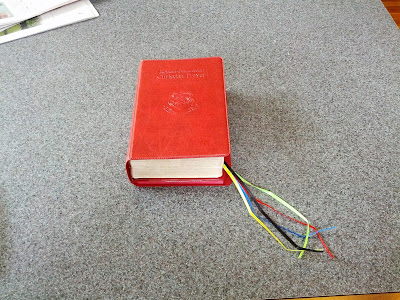 What to do? You don't want to leave it like that, for the elongated ribbons will become a distraction, will end up doubled-back into other pages, get caught in other books, etc. But if you cut them, they will probably fray and eventually become too short. Now if they're real cloth, you can cut them and put a little knot at the end that's easy to get small enough so as not to be a bother. But even better, as I've discovered, with whatever synthetic material out of which replacement ribbons usually seem to be made here in America, you can cut them just a little longer than you want them to turn out and then cauterize them, as it were, toast them as I like to say, so they won't fray: 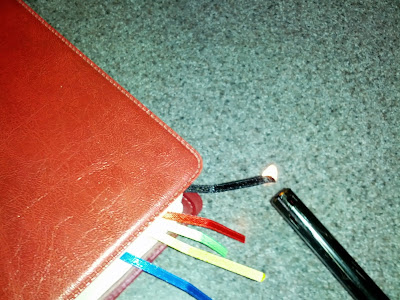 Just put a little bit of fire close to the cut end and watch it curl up into a little melted end that will never fray on you. Remember to cut them just a little longer than you want them to turn out, as I say, and you'll end up with ribbons just the right length, and that will stay that way: 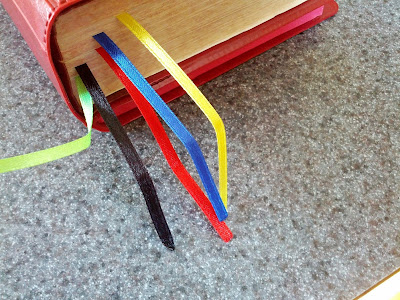 Posted by Brother Charles at 3:45 PM

Hahaha. I have done that,too. Dang near set fire to the book, though. Duh, Lou. :o

I used to have that cover. It was perfect as it allows you to have the LotH and the Franciscan supplement in one book. It literally fell apart, after some time. Taped it thoroughly until that fell apart. :(

Haven't been able to find one since. Will look around for it again. :)

Where do the cheerios come in?

@Louis Yes, that's a hard book to find these days...a few years ago I saw a stack of them behind the counter at the St. Francis of Assisi bookstore by the OFM on 31st in Manhattan. Now that the 3rd edition Roman Missal in English has happily prompted our bishops to make us a new LoH, I hope someone is also at work on updating our Franciscan propers and maybe, eventually, we can have a whole new edition.

@Petra I cut up the box to make the tabs that go in the spine of the book, to which the sets of ribbons are stapled.

Hey fr happy for u back home and all.God bless u and enjoy your holiday.
Love and best wishes,Faith

Very useful. I am going to suggest you for the position of Segnalibrista generale.

So THAT's how you do it. I was thinking of trimming mine and dipping the ends in glue. But that would be really messy...
Now all I need to know is which color should be used for which thing. Is there a system, or is it just random? I haven't been able to figure that out, so I made my own system, as random is just NOT a possibility in my world.

@Barb You remind me that with cloth ribbons you can also put a little clear nail polish on the ends. I learned that one making cord rosaries. As far a color-coding, I've never thought of that and now I'm concerned.

Oh no! I'm sorry! I figured that you would have had this all figured out, since we seem to have similar OCD tendencies. (Mea culpa for mentioning it!)

I tie medals, beads, stones and shells on the ends of mine - and then toast them.

And if you can keep all of that in order - or you are a bit OCD - well done!

----and as for those who are colourblind!---well, I suppose God will know they did their best! (Sorry---couldn't resist) Cecily.

I volunteer in a prison where there's a chapter of Lay Dominicans. These "cloistered brothers" have to use the materials they have, and can't go out to buy ribbons. They pray LOH, too. In place of ribbons they you thread. They braid several strands of threads together. That's how they mark their pages. It really is beautiful, besides being functional.

Speaking of books I am looking for a new book to read on kindle.
I have read pope Benedict, Dominic Crossan,and NT Wright
Any suggestions under "theology?" Thanks

I use the plastic that come with colored notebook dividers. Cut them about 3/4" wide, and long enough to barely peek out at the top. They never decay and they flip you to the page a bit better.

Love this ribbon,we are a ribbon supplier from china,if you want buy cheap ribbon,just buy it from our ribbon shop.