Socks, Kittens, and the Spiral Staircase

Years back I had this idea that I could save time and annoyance by always buying exactly the same kind of socks. That way I wouldn't have to worry about matching them, because they would all match each other, I thought. But this turned out to make matching even more difficult because I had to match the socks according to age, by how worn out they were, more or less. I then realized that to make the plan work I would have to change all my socks at once and then be careful to wear them in an exact rotation so that they would all wear out at the same rate. Feeling that I had reached the point of diminishing returns on my plan, I gave up.

I thought of that today on my little visit to the local colony of semi-feral cats, which seems quite lively upon my return to Rome and full of medium-sized kittens from the explosion of births that seemed to happen right at the end of spring.

Among the kittens I saw was this little guy: 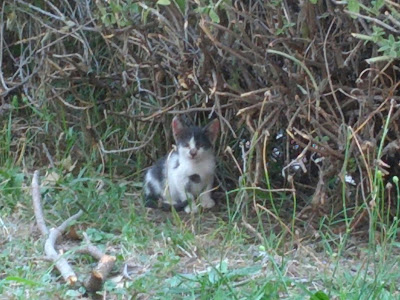 Could this be the same kitten as this one? 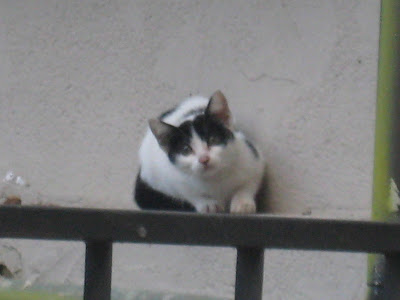 No. They have to be different kittens, because these pictures were taken three months apart. Feral kittens either grow or die, as I have learned.

I might feel like I'm looking at the same kitten, but I can't be, because time has passed. It reminds me of an encouraging image for the spiritual life that I picked up somewhere along the way. Often we feel like we're going in circles, struggling the same things, making the same little bits of progress over and over but then falling into the same traps and distractions and sins, etc. It might feel like I'm going around in circles, but really it's like a spiral staircase. We come around to the same coordinates over and over according to one axis, but on another we are in a deeper or higher place (depending on whether you prefer the ancient metaphor of the spiritual ascent or the modern metaphor of the spiritual excavation.) One of the important practices of spirituality is to keep our view of ourselves wide enough to see not only the axis on which we come around to the same challenges over and over, but to see that at the same time we are also in a different place, closer to God and deeper within ourselves.
Posted by Brother Charles at 6:38 PM

Curiously, you have something in common with Richard Dawkins, who complained on Twitter some time ago that he had difficulty getting socks to match: his atheist, reason-based, scientific solution was the same as your faith-based answer - get lots the same.

Too true! We do sometimes feel as if we are going around circles. I periodically write my thoughts and I never cease to be amazed by the fact that I will find the same thoughts expressed in entries even a year apart. Now, wouldn't you think I would have gotten over that hurdle by now. But, no, I am just a poor, weak soul struggling to follow the Lord in joyful commitment. And speaking of joyful commitments, I will be making one on Saturday. I have been accepted by the Oblates of the Precious Blood and will make the Solemn Resolution of Love on the Feast of the Exaltation of the Holy Cross. Fr. Moe will preside. I am truly elated. I will probably continue to feel as if I am going in circles at times, but, as can be seen throughout my life, God writes straight with crooked lines. Please keep me in prayer on Saturday and always. You are always in mine.