Back when it was announced that Pope Francis would go to Assisi for the feast of St. Francis we were told that his day would include a short visit to the parish church of Santa Maria Maggiore, adjacent to the bishop's house and currently in Capuchin care. There he would have a brief meeting with our General Minister and other Capuchins. For this purpose especially, the Provincial Minister of Umbria was going to offer hospitality to twenty friars from the General Curia fraternity.


So up went that commonplace of religious life, the sign-up sheet, and even I signed up.

Tickets were given out at breakfast. There were three sorts: one for the meeting with Pope Francis at S. Maria Maggiore and two regarding the Mass at the Basilica of St. Francis, one to be a concelebrant, the other to be an ordinary minister of Holy Communion. Now it seemed to me unlikely that someone could meet Pope Francis at S. Maria Maggiore at 10 o'clock and then somehow make it anywhere near the Basilica of St. Francis for Mass at 11, even with a ticket. So I made a choice. Since I had already concelebrated Mass with a Pope, I took only the ticket for the meeting at S. Maria Maggiore. 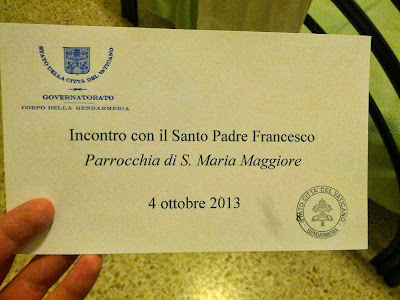 In fact, I had thought of this two-event problem the night before, and so to make sure I got to Mass on the feast of St. Francis, I got up and heard Mass at 5:15 a.m. with the sisters who work in the place where we were staying.

After breakfast the group set off for the church of S. Maria Maggiore. Assisi was crowded and excited. Arriving at the Piazza del Vescovado, we went into the church through the back door to the sacristy and sat down for a couple of hours of prayer and waiting. 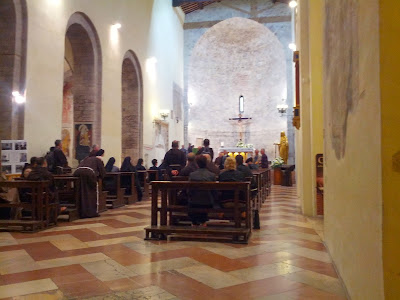 After a while some official person came in and said that, tickets notwithstanding, only those whose names were previously noted on some list would be allowed to meet the Pope. Almost all of us had received our tickets that morning, and so weren't on any list. So we were sent outside. At this point, the brethren who had tickets regarding the Mass at the Basilica of St. Francis, no doubt wanting to cut their losses and make sure they got to the Mass, took off in that direction. The few of us who had not taken tickets for the Mass remained. Even if we weren't going to meet the Pope after all, we had a nice spot on the piazza to see the Pope's arrival at the bishop's house where he was going to pray and visit with some of the folks served by Caritas.

Standing there waiting outside S. Maria Maggiore, I got to thinking about my journey. The first time I was in Assisi, during my first year as a Catholic, I had stayed across the way from where I was standing right then, at the Casa del Terziario: 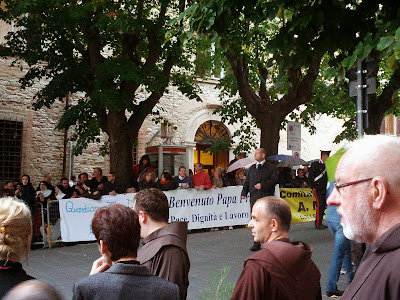 The illuminated entrance there is the front door. The sisters there were very nice to me. They would put me with other English-speakers at breakfast. I remember one morning I was directed to sit with a very serious looking couple of a certain age. To my sheepish question, "Do you perhaps speak English?" the gentlemen announced, quite formally,

"Of course we speak English! We are Norwegian."

With all these things rolling around in my head, I stood there on the Piazza del Vescovado, thinking what a thing this journey is. Twenty years after that week of my head swimming with prayer and St. Francis and Assisi, I was there in that same spot again, a Franciscan friar myself (for the second time even) waiting to see a Pope named Francis.

At the same time, unbeknownst to me, negotiations were going on in the church. I think our General Minister and the pastor were pleading a little bit, and they must have prevailed. It was then announced that a certain small number of friars, in addition to some folks from the parish, would be allowed back in the church to meet Pope Francis when he came to visit. This number matched, more or less, the number of the brethren who remained after the rest had gone off to the Basilica of St. Francis, so we went back into the church. Then there were various practices and schemes for how to line up, some at the instigation of official persons and some at the direction of self-proclaimed choreographers, but none of these ended up having much bearing on what came to pass when the Pope finally arrived.

When the moment came, we knew that Francis had exited the Bishop's house from the cheers out in the piazza. Then he appeared at the doors of the church. The General Minister received him and he came in and stood just inside the entrance. He was told a little bit about the church. After he had embraced and blessed the children, the rest of us lined up to greet him. I was introduced as 'Br. Charles. An American.' I meant to say something simple like, 'Thank you, Holiness. I always pray for you' but I don't think I succeeded in saying anything. I just took his hands, looked into his face, bent down and kissed his ring, looked in his face again, and then stepped to the side to make room for the next person.

He has a kind face. There was something in it that I could only call a gentle tiredness. His hands felt soft. He's smaller than he seems on TV.

And then it was over as quickly as it had begun. Francis was on his Popemobile, leaving for his next appointment at the tomb of St. Francis. Everyone who had been in the church was out on the piazza. Feeling a little overwhelmed and not being sure what to do, I just went to the Blessed Sacrament and prayed for our Pope and everyone else I could think of, all the pilgrims in Assisi, all my sister and brother Franciscans on our feast day, the people who had died at Lampedusa the day before, and everyone God has given me along the way between my stay at the Piazza del Vescovado during the second week of Easter in 1993 and the morning when I met the Pope there on the feast of St. Francis in 2013. 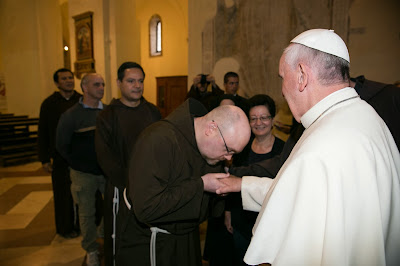 Posted by Brother Charles at 5:21 AM

Wonderful! Thanks for sharing your experience of meeting the Vicar of Christ.

Tender and inviting. Thank you, Charles. I feel like I met Pope Francis through you. You also reminded me of my meeting with John Paul II. Knowing he could not look in everyone's eye, I held his hand until he looked at me. I wanted him to know that many looked at him with love and admiration not because he was the Pope, but because he was a brother in Christ.

Almighty God, bless and protect our Holy Father (and Father Charles, and everyone here, too) :)

I tell you, St. Mary Major is the place to see this Pope. He loves that church. That's where Sr. Sarah and I "ran into" him this summer when we were there. It also happens to have a baby handy! He came right over to us because we had positioned a mom with her baby between. Be wise as serpents . . . ;-) So glad you got to meet him, Fr. Charles.

I'm so happy for you - what a wonderful meeting. I hope you can meet him again some day. I love Assisi so much!

A friar who was ordained to the priesthood yesterday invited me to be the preacher at his first Mass. Here's the homily I gave. (Trini...