The Dream of Innocent III 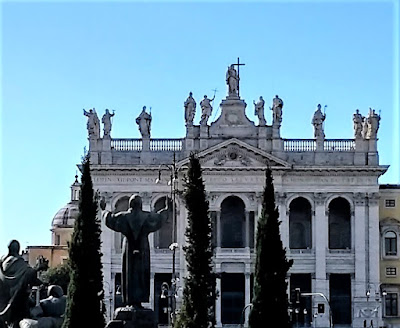 On the following day, therefore, the man of God was presented by that cardinal to the pope, to whom he revealed his entire holy proposal.


The pope, a man of extraordinary discernment, in due fashion assented to Francis's request, and encouraged him and his brothers in many ways. He blessed them saying: "Go with the Lord, brothers, and as He will see fit to inspire you, preach penance to everyone. When almighty God increases you in number and grace, come back to us. We will grant you more, and entrust you with a greater charge."

Before the saint left his presence, the Lord Pope wanted to know whether what had been, and what would be conceded, was according to the Lord's will. And so, he said to him and his companions: "My dear young sons, your life seems to Us exceptionally hard and severe. While We believe there can be no question about your living it because of your great zeal, We must take into consideration those who will come after you lest this way of life seem too burdensome."

The pope saw that their constancy of faith and the anchor of their hope were so firmly grounded in Christ, that they did not want to be shaken from their enthusiasm. So he said to blessed Francis: "My son, go and pray that God will reveal to you whether what you ask proceeds from His will. In this way, knowing the Lord's will, We may accede to your desires."

Once God's saint had prayed, as the Lord Pope suggested, the Lord spoke figuratively to him in spirit: "There was a little, poor and beautiful woman in a desert, whose beauty fascinated a great king. He wanted to take her as his wife, because he thought that, from her, he would have handsome sons. After the marriage was celebrated and consummated, there were many sons born and raised. Their mother spoke to them in this way: ‘My sons, do not be ashamed, for you are sons of the king. Therefore, go to his court and he will provide for all your needs.' When they went to see the king, he was struck by their good looks, and noticing a resemblance to himself in them, he asked them: ‘Whose sons are you?' When they answered that they were the sons of the little poor woman living in the desert, the king embraced them with great joy. ‘Do not be afraid,' he said, ‘for you are my sons. If strangers are fed at my table, how much more will you, who are my lawful sons.' He then ordered the woman to send to his court all of the children she had borne to be fed."

When these things had been shown to blessed Francis while he was praying, the man of God understood that the poor woman signified him.

After he completed his prayer, he presented himself to the Supreme Pontiff and narrated point-by-point the story that the Lord had revealed to him. "My lord," he said, "I am that little poor woman whom the loving Lord, in His mercy, has adorned, and through whom He has been pleased to give birth to legitimate sons. The King of kings had told me that He will nourish all the sons born to me, because, if He feeds strangers, He must provide for His own. For if God gives temporal goods to sinful men out of love for providing for His children, how much more will He give to Gospel men who deserve these things out of merit."

On hearing this, the pope was greatly amazed, especially since, before blessed Francis's arrival, he had seen in a vision the church of Saint John Lateran threatening to collapse, and a religious, small and of shabby appearance, supporting it on his own shoulders. When he awoke, stunned and shaken, as a discerning and wise man, he pondered what this vision meant to tell him. A few days later, blessed Francis came to him, made known his proposal, as we have said, and asked him to confirm the rule he had written in simple words, using the words of the holy Gospel, for whose perfection he fully longed. As he was reflecting on how enthusiastic blessed Francis was in God's service, and comparing his vision with that shown to the man of God, he began to say to himself: "This is indeed that holy and religious man through whom the church of God will be sustained and supported."

So he embraced him and approved the rule he had written. He also gave him and his brothers permission to preach penance everywhere, with the stipulation that the brothers who preach obtain permission from blessed Francis. Afterwards he approved this in a consistory.