Yesterday I made a pilgrimage of sorts, to the place where I first took the Franciscan habit. Here it is: 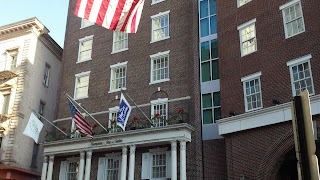 When I lived there it was called St. Francis Chapel & City Ministry Center. Now it's a Hampton Inn & Suites. Where I once prayed before the Blessed Sacrament, which was exposed each weekday afternoon, folks now sit in a lobby with newspapers and coffee. So pass the glories of this world, even the pious ones.

I prayed None outside, and I prayed for my vocation.

In his Testament St. Francis said simply that when what had bitter was changed into "sweetness of soul and body" after his time with the lepers, he paused for a moment and then "left the world." But here's the thing about leaving the world: pious vainglory tells you that you can leave the world in a big, dramatic, single step. The truth is, the world still lives inside. It will fight to get you back at every step. The world is a possessive, unchaste, jealous lover. And the world would rather have you dead than let you belong to someone else.

Leaving the world means doing so anew each day.
Posted by Brother Charles at 10:12 AM

The pilgrimage continues. Interesting to watch the changes resting in that which does not change. Fun to see the world return our clinging, as though a favor. Flypaper is fascinating as a metaphor. Imagining stillness so complete we do not stick to the glue. Imagining the Lord melts glue, frees our little feet from the sticky stuff that keeps us pinned down.

There are still Franciscans in Providence; my uncle used to be one of those Friars at St. Francis Chapel. Now he is at Our Lady of Lourdes AND busy running the Bread & Blessings program that feeds the homeless several days a week.