Gentle Advice From The Italian Ordo

The new Ordo that comes ahead of the new liturgical year is like the ecclesiastical equivalent of the new box of crayons on the first day of school.

Finding an Ordo for the year of grace 2013 in my mailbox yesterday, I noted right away that the Italian version (or at least the version of the Capuchin provinces of the middle part of Italy) is somewhat bigger and more beautiful than what we have in the States: 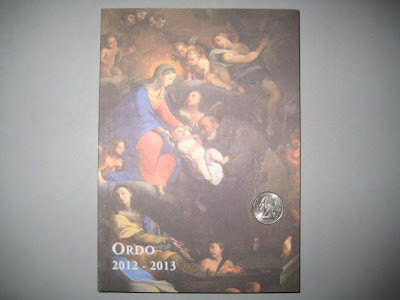 It also has a heap of information presented by way of preface, some of it useful, like the faculties granted to priests of the Order to absolve from certain censures and excommunications, as well as the faculty to commute private vows. (I remember reading about that last one when I was first ordained and thinking that I would never have the chance to exercise such a thing. On the contrary, I have had a couple of occasions to use it.) Other parts seem somewhat random, like Universae Ecclesiae in between the sections of pastoral considerations for Celiac disease and the Eastern Orthodox, respectively.

However, one section caught my eye especially, on how to improve celebrations of the Liturgy of the Hours. Most of the points are pretty standard, e.g. sing, don't pretend things are optional when they aren't, etc. A couple of the points, though, are fun:

"In the recitation of the Offices a 'spoken' style is used, thus avoiding those emotional emphases that disturb praying in common."

Anyone who has been in religious life knows what that's about. So much for Franciscan prayer being 'affective.'

"If a minister makes an error with an antiphon or something else, avoid brusque and immediate corrections, which are ill-suited to the climate of prayer."

There's one some religious could pray over.
Posted by Brother Charles at 8:34 AM

Email ThisBlogThis!Share to TwitterShare to FacebookShare to Pinterest
Labels: Catholic Stuff, Fun, Liturgy of the Hours

I wish I read this earlier in the day. I was at a meeting today where sadly I did not "avoid brusque and immediate corrections." My bad.