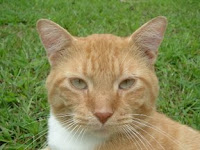 After morning prayer one of the brothers looked out the window and announced that the orange cat had been run over. He's one of our neighbors. We all looked, and there he was, lying there flattened on the street. The gray tabby, another neighbor, was sniffing and poking at him.

We discussed what to do, and decided we ought to go scoop him up and dispose of the corpse. But when I went outside, I discovered that it wasn't a cat at all. It looked like some kind of orange ferret. Another brother came out with a shovel and when we had scooped it up, despite being flattened, it showed no sign of injury.

So we couldn't decide if it was real or not. Finally we agreed that it was some kind of furry creature that had long since been slaughtered and turned into a scarf or some other fashion accessory. Then we threw it out.

It was still kind of sad, to think of this bright orange ferret-looking thing being killed to become somebody's tacky decoration, only to end up flattened and wet in the middle of the street, being inspected by confused cats and friars.
Posted by Brother Charles at 7:46 AM

at least the poor orange cat is alive....