I guess a Catholic blog is supposed to be an enterprise of the New Evangelization, using new means to bring the good news of Jesus Christ to a world once-evangelized but grown confused and forgetful. But one can't be in the world and totally not of it, as it were, and one can't be online and not be, at least to some degree, bedazzled and rendered subject to the internet's beguilings. So, after, seven years of blogging I surrender to the internets, and present to you a post of kitten pictures.

Eight months ago, when I moved to this curious outpost that is the latest destination to which the blessed misadventure of my Christianity seems to have brought me, I found that there was a colony of semi-feral cats living around the kitchen. The kitchen here is no small organ of the institution; twice a day, every day, it produces a meal for over a hundred friars. It also seems to offer something to the cats. Here, for example, is a tabby cat looking up as she samples from a hefty portion of tagliatelle bolognese: 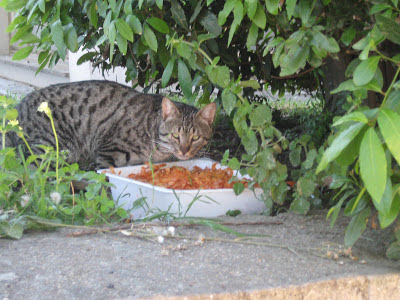 I don't know why the kitchen feeds the cats. Maybe someone there just likes them. Maybe someone figures it better to support cats than deal with rats.

In the course of my daily walk, I came to notice that one the cats, a poor thing of a creature, a little calico cat with one eye and something wrong with one of her ears, seemed less feral than the others. So, over time, I tried to make friends with her, offering things like treats and scratches. As a result of this effort, during which other cats also learned about the phenomenon of the treats, I can assert, from anecdotal evidence, that four out of five Roman cats prefer Purina 'Party Mix' in the 'Mixed Grill' variety. Yes, it's in English.

Eventually one one-eyed calico and I became great friends. Now she sometimes comes on my walk with me, and sometimes she sits with me if I go outside to pray or read. Here she is in one such moment of relaxation: 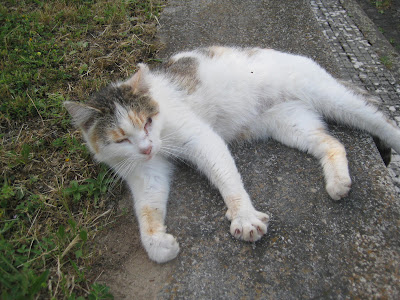 Around Holy Week, I started to wonder if she was pregnant. I'm no expert so I wasn't sure, and my queries were met with sounds I didn't understand. However, as time went by her pregnancy became quite obvious. Then, a little before the Fourth Sunday of Easter, she disappeared from all her usual places, only to reappear a few days later, clearly not-pregnant. No kittens were seen, though. And I had doubts that any had survived, because my friend the one-eyed calico had returned to all of her usual sitting places and all of her previous activities. If she had any living offspring, I thought, she didn't seem to be a very attentive mother.

About a month went by in this situation. No kittens were seen. More and more, I presumed them perished or eaten. But then, around Pentecost, a couple of the friars reported hearing little meows coming from a certain shrub. (The verb, 'to meow' is adorable in Italian by the way, miagolare.) One said that he thought he had seen kittens. However, when I went to investigate I was like Saul's companions on the way to Damascus in the Acts of the Apostles; I heard the voice but saw nothing (it's a very dense shrub.) After that day, I never again heard any little meows from the shrub, nor in any other place.

So, time went by again, and I continued to presume the worst regarding the fate of my new friend's offspring.

Then, this afternoon, after joining the friars for the hour of adoration of the Blessed Sacrament to which we were all invited today by our Holy Father Francis, I went out for a little walk and quite unexpectedly saw some kittens.

Given a guess that the male party involved in the one-eyed calico's pregnancy was probably the capogatto of the colony, this tough creature I've come to call Big Meanie, 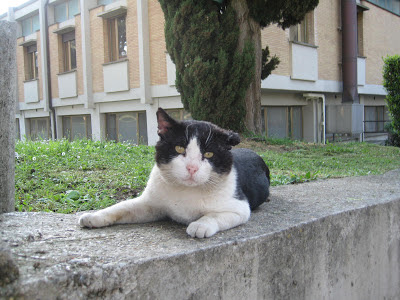 I'm guessing that these little things are the one-eyed calico's kittens. They look about seven weeks old, right? 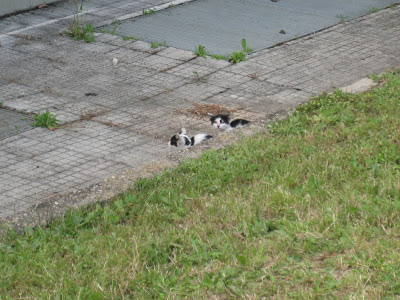 I know it's not a great picture, but that's as close as I could get at first. They look a lot like their dad, no? When I tried to come around the other way and get a little closer, one of them ran away but the other stayed long enough for another picture: 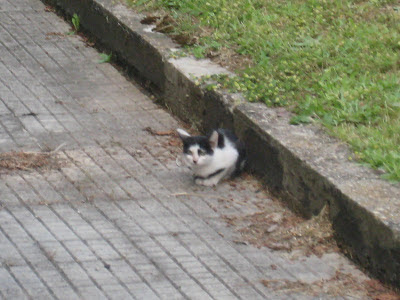 Finally, I sneaked around to where I thought they might have gone, and found that this one had got itself onto a railing from which there was no obvious escape. Hence I was able to capture this anxious little expression: 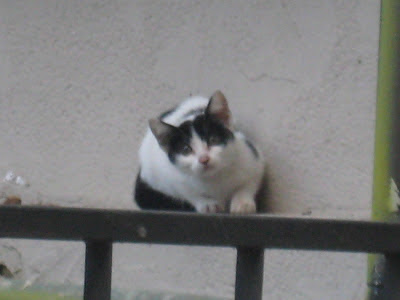 Posted by Brother Charles at 8:59 PM

@ Diana: that is an awesome avatar! May I ask where you found it?