with blessed Joseph, her Spouse

I must be a little out of it, or busy, or preoccupied, or distracted--'all of the above' perhaps--to have missed something as sweet and lovely as the addition of St. Joseph to the Eucharistic Prayers last month.

It's a beautiful thing for the whole Church Universal of which St. Joseph is patron; that is, the Church at rest in Heaven, the Church suffering the purifying hope of purgatory, and the Church here on earth, still struggling on the earthly pilgrimage. But it's also a particular joy for those of us who have a devotion to St. Joseph.

As an adult convert born somewhat out of order, I was confirmed a few months after I was baptized and received my first Holy Communion. At the time I was quite worked up about choosing a confirmation saint; I was sure that it was something that one did, something important. I went back and forth with different ideas. I almost chose Justin Martyr because I was a philosophy student at the time, and because--at the time--I viewed the study of philosophy as something that had played an important part of my journey to the faith. In the end I went with St. Joseph, and I have no doubt that it was an inspired choice. Over the years I have turned to his example and sought his prayers especially for the grace of working honestly and diligently, the willingness to be quiet, and in the hope of becoming a good steward of the graces and mysteries God has entrusted to me.

It also seems to me that the addition of St. Joseph to the Eucharistic Prayers honors the intention of Pope Blessed John XXIII when he added St. Joseph to the Roman Canon. At the time the Roman Canon was the ordinary Eucharistic Prayer of the Roman rite. Like it or not, in our time it has been marginalized in the liturgy, sometimes saved for special occasions and often just not used at all. One of my classmates in the Order, upon hearing the Roman Canon, became indignant at the priest for 'making up' his own 'random' prayer. Though he was cradle Catholic, he had never heard it before! So adding St. Joseph to the other prayers puts into practice for us what John XXIII seems to have wished, that St. Joseph may be venerated in every celebration of the Eucharist.

One of the fun little side effects of this is that by stickers or pencillings-in or whatever means, missals for the Ordinary Form will now look more like missals for the Extraordinary Form, or at least those published before December 8, 1962 or republished as facsimiles thereof.

For example, my little concelebration book from my place in chapel: 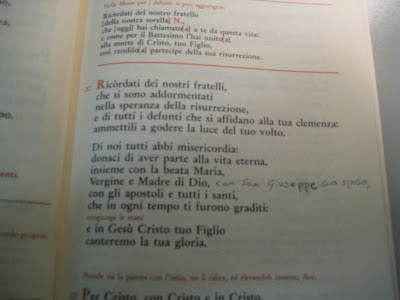 So tell me, friends back in the English-using liturgical world, have the publishers from which we all dutifully ordered our new missals almost two years ago going to send some nice stickers?

St. Joseph, pray for us.
Posted by Brother Charles at 3:17 AM