Paula's comment on yesterday's post made me realize-to my surprise-that I had never made a proper post on the Franciscan Crown, which is a lovely devotion. I tend to opt for the Franciscan Crown on what would be Joyful Mysteries days for the regular, Dominican rosary, and during Advent. 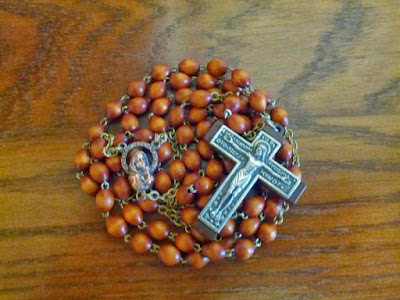 The Franciscan Crown, or Seraphic Rosary, or Rosary of the Seven Joys of Mary ought to look more or less like a standard, five-decade Dominican rosary, except that it has seven decades. The front part, instead of the one bead-three beads-one bead configuration, should, working up from the Cross or Crucifix, have a configuration of two beads-two beads-one bead. Make sure you look for this if you seek a Franciscan Crown, since many are not built properly in this regard!

So here's how you pray it:

Start straight away with the seven decades, meditating on the seven joys of Our Lady:

1. The Annunciation
2. The Visitation
3. The Nativity of the Lord
4. The Adoration of the Magi
5. The Finding of the Child Jesus in the Temple
6. The Resurrection
7. The Assumption and Coronation of Our Lady Queen of Heaven and Earth, Angels and Saints (and of the Seraphic Order besides!)

An easy way to remember these joys is to think of the regular Joyful Mysteries, replacing the Presentation with the Adoration of the Magi, and adding the Resurrection and Coronation.

Once you have prayed the seven decades, pray on the beads that go down toward the Cross or Crucifix:

On the first set of two beads, pray two Hail Marys to make 72 in total; somebody once said that this was the number of years that Mary lived on earth. I don't know the origin of this tradition.

On the second set of two beads pray, for the intentions of the Holy Father, an Our Father and Hail Mary, finishing with a Glory.

Finally, I usually add, for the Cross at the end, Francis' own prayer he recommended to the brothers upon seeing a Cross: "we adore you, Most Holy Lord Jesus Christ, here and in all your churches throughout the world, and we bless you, because by your holy Cross you have redeemed the world."

There are several legends about the origin of the Franciscan Crown, The most popular legend says that a young man was very devoted to Our Lady, and used to put a crown of flowers on her statue each day. Later, after he had joined the Friars Minor, he found himself locked up in the novitiate and was unable to perform this devotion. He became despondent without this prayer in his life, and made up his mind to go back to the world. In order to save his vocation, Our Lady appeared to him in the night and taught him this prayer, so that he might give her an even better crown of prayers each day.
Posted by Brother Charles at 8:38 AM

Very interesting. Thank you for sharing this, Father.

So with the Franciscan Crown it's always the Seven Joys and never the Seven Sorrows?

What an inspiring story and what a beautiful devotion! I was moved to pray it today for the first time during our long wait at our Reconcilliation Service. I looked it up on Google and followed the Wikipedia instructions! It’s lovely and I’m going to try to pray it often if not daily! And

Ah, Monday of the first week of Ordinary Time. So begins that curiously plain liturgical 'season' that runs from the morning after t...