Today I received a new habit in the mail from brother tailor's shop. This is my fourth habit since my class was invested eight years ago. When we were novices, we started out with two. I wore one of them until it started to get a little ratty, which was a couple of years into studies. Then I started to wear the second one for Sundays and big events, leaving the rattier habit or day-to-day use.

Eventually, my first habit was starting to fall apart and get very frayed around the cowl and the bottom hem, so I took it to brother tailor to see if he would fix it up. He took one look at it and--grabbing his shears--cut it up as beneath anyone's dignity. This wasn't too shocking for me, because I had a girlfriend in college who would perform this same ministry for me with my secular clothes.

Luckily, this was around the time of perpetual vows, at which we receive a new habit for the big event. So then I had two again, and I demoted my second novitiate habit to informal use, as my perpetual profession one was now the best I had.

Well, after two years in parish ministry, my second novitiate habit was getting pretty frayed around the cowl, and I had torn out the bottom hem a couple of times on office chairs, stairs, and car doors. Knowing it wasn't long for this world, and not wanting to be left with just a single habit, I ordered a new one over the summer. It arrived this morning, wrapped up tight in brother tailor's signature cylindrical package: 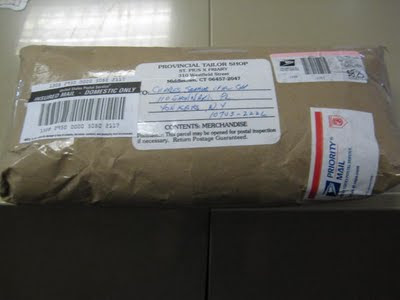 The packaging teases you; it's like some kind of friar superpower to get a habit folded up so well, and I have never been able to accomplish it. 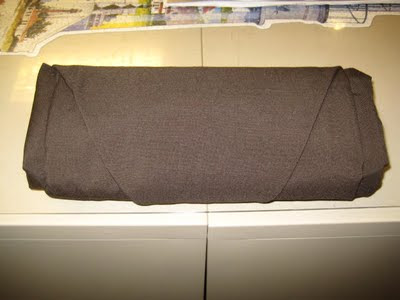 Posted by Brother Charles at 11:15 AM

Hey that is pretty neat. Thanks for letting us in on it.

Now if could come out of that little packaging without any need to iron it before you donned it, that would be a friar superpower!

friar: Isn't it wonderfully freeing to put on a habit each morning instead of trying to figure out what you're gonna wear?
I wear my habits out until they are so thin that modesty and decency come into question!!
There is great wisdom in this...wish other religious would figure it out:<)!

You cracked me up with the remark about your girlfriend's ministry. :)

Rachel: Once I went to get a new driver's license, and when I came home she saw that I was wearing the same shirt as in the previous one. Into the trash it went.

This clothes thingy: my husband used to wear the same clothes for years. I can see the same clothes in group pictures we have from different holidays. When he found something that was comfortable to wear, he wore it to death!!!

Thanks for the memory! :)

Too funny. My husband is the same way, as is my older son. I have been tempted more than once to take scissors to something. Instead, I just sneak it out of the house in a black Hefty bag.

Weeping, as We Should

I've been enjoying the prayers over the people that the new missal offers during Lent. Today's is especially good: O God, who cho...