When I took the psychological tests as part of my application to the Capuchin Franciscan Order, the doctor, a religious himself, told me that I had a "feature" of obsessive compulsive disorder.

"It's the lowest level of diagnosable pathology," he responded. "Don't worry; it's actually an asset in religious life."

Later today I am to offer Mass for a high school student retreat. Have alb, cincture, stole, and chasuble, will travel: 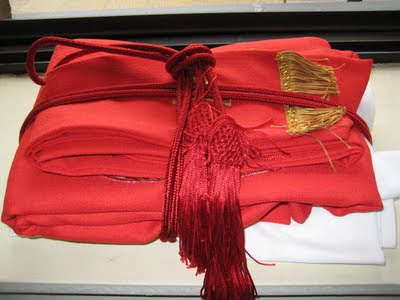 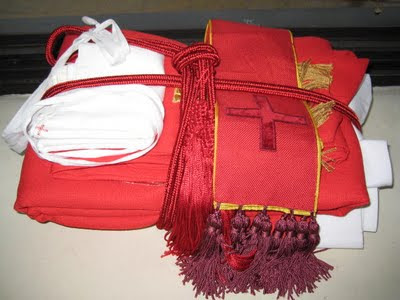 Posted by Brother Charles at 2:57 PM

No maniple or amice? *shakes head*

So, question: how big of a barrier would actually having OCD be to entering religious life? I was diagnosed with clinical-level OCD, but it was treated with cognitive-behavioral therapy and medication for a few years after it was first diagnosed (when I was a teenager). I've been off meds and out of therapy for years now (I'm in my mid-20s), and neither I nor my therapist see any reason why I should ever be in treatment again. It was never severe, only moderate, and the techniques I learned to fight it really work, and have enabled it to really fade into the background of my life, so it's no longer an issue. OCD almost never goes away entirely, but it's no longer a problem in my life. Would a history of treatment for OCD prohibit me from seeking to enter religious life (as I'm thinking of doing)?

Not at all, Cole. Be encouraged in your vocation and go for it.

Is the amice usually worn by the Capuchins? I just seem to remember the alb over the habit and once a Capuchin priest at a Mass I attended just put on a stole and chasuble directly over the habit.

Capuchins--myself included--often do not cover our hood, as you say. Technically, this is incorrect. Sacred vestments should cover all of our street clothes, which is what our habit is. There is always a tendency among religious, especially those who have more or less abandoned their habit as clothing, to treat the habit as a kind of ceremonial vesture.

Practically, the Capuchin hood is pretty large, so covering it with an amice takes some practice. Many also use albs with hoods to accomplish the same thing.