Given Up For You

Some weeks ago our pastor decided to move our early weekday Mass (6:45 am) into the friar's chapel. Twenty or so people in a church that seats 800 didn't make much sense! One aspect of the change I've really come to appreciate is that the priest now faces a large and beautiful crucifix. Here's the view from behind the altar: 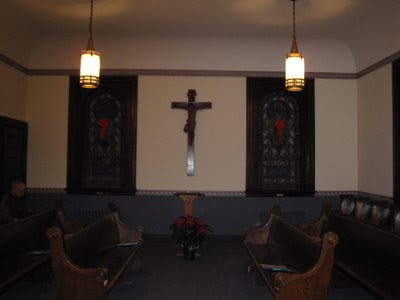 Having this image of Christ crucified in front of me has really added a new and prayerful dimension to my offering of the Mass. I think I grasp in a deeper way how the "which will be given up for you" of Jesus' words are necessary for understanding the "take this, all of you, and eat it. This is my body..." Christ rising into the bread and wine of the Eucharist are part of the same giving up, the same self-emptying as the incarnation and the passion. It is all a single and eternal act of God, which is why the Eucharist can be offered each day and still be the same sacrifice as the perfect sacrifice of Calvary.

This experience has helped me to appreciate the wisdom of the General Instruction of the Roman Missal 308 when it says: "There is also to be a cross, with the figure of Christ crucified upon it, either on the altar or near it, where it is clearly visible to the assembled congregation. It is appropriate that such a cross, which calls to mind for the faithful the saving Passion of the Lord, remain near the altar even outside of liturgical celebrations."

In my own experience, though, this means that the assembly, facing liturgical east, gets to gaze upon Christ crucified, but the presiding priest, in the versus populum stance, does not. However, I remember that when I concelebrated with Benedict XVI at St. Patrick's Cathedral, there was a crucifix on the altar facing the Holy Father.
Posted by Brother Charles at 7:41 AM

A Bit of the Blarney said...

What an intimate and holy environment. Cathy

hi Fr. C!
very nice sharing! although i don't ever get to the 6:45 am Mass there on weekday mornings (maybe i'll try to once in a while when the weather gets better), i do come for morning prayer on saturdays (and occasionally other days) and it's nice that we have morning prayer in that beautiful chapel, too! like GrandmaK(Cathy) says, it's a very "intimate and holy environment."
PEACE!
~tara t~

That's beautiful. We recently moved to a new parish with a huge Crucifix behind the alter. I love it!!

Neat chapel... curious why the pews face each other? Looks like how Benedictines (and probably other religious) pray.

Speaking of that rubric, the only crucifix in Louisville's Cathedral of the Assumption is the one used for processions. Always found that a bit odd, and apparently liturgically incorrect.

Which book by Kelly were you referring to?

Oh, of course, Matthew Kelly! I'm almost halfway through "Rediscovering Catholicism" and he's said some pretty good things. He emphasizes the importance of discipline to our Christian growth. In Chapter 9 he's sounding a little too much like a motivational speaker... I feel like he's implying if you're not a great person like Mother Teresa, you're a nobody and your life is a waste. That's not the Gospel.

I'm going to read "Rhythm of Life" after this one. I've heard better reviews of that one, all positive. I think it focuses more on building Christian discipline.

I like the smaller settings myself. I'm not into large masses but smaller more intimate celebrations of the eucharist. It's almost as if Jesus is there with us in a more personal way, like imagine it was that Holy Thursday so many years ago.

Don, you make me think of Mt. Irenaeus!